10 Movies Based on Games & Toys

This post led to a lot of debates in the Studio as to what constituted a movie based on a toy or a game similar to the chicken and egg argument. What came first - the movie or the toy?

Eventually we settled on ten movies that we all agreed on, which took a while. So we stress that these are in no order as it would have taken a week for everyone to settle on that!

What are your favourites? Have we left any good ones out?

Pinocchio is a classic that most of us have seen at one point or another. The plot involves an old wood carver named Gepetto who carves a puppet named Pinocchio. The puppet is brought to life by the Blue Fairy, who informs him that he can become a boy if he proves himself to be brave, truthful, and unselfish.

Pinocchio's efforts to become a real boy involve encounters with a host of unsavory characters and some more savory ones like Jiminy Cricket. And, of course, the one thing about Pinocchio is that when he lies his nose grows!

Cue shouts of "I'm a real boy!" and sing songs of "When You Wish Upon A Star". 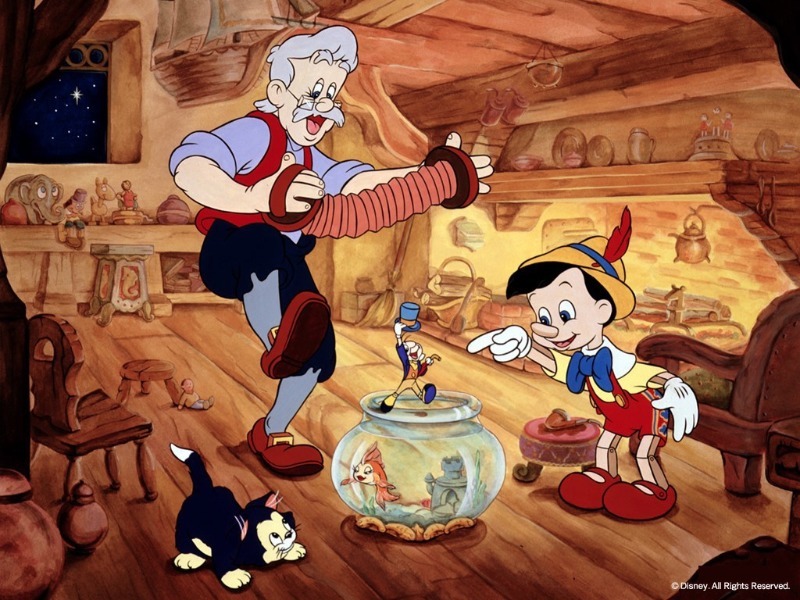 The Dungeons and Dragons movie is, of course, based on the famous role-playing game of the same name. The Empire of Izmer has long been a divided land. The Mages - an elite group of magic-users - rule whilst the lowly commoners are powerless. Izmer's young Empress, Savina, wants equality and prosperity for all, but the evil Mage Profion is plotting to depose her and establish his own rule. However, the Empress possesses a scepter which controls Izmer's Golden Dragons.

Often lamented as one of the worst movies of all time by online critics, the movie did bring the game to the big screen, and prompted two further straight to DVD follow-ups. There is currently a legal battle ongoing as to whether Warner Bros or Universal have the rights to bring out the next big budget D&D movie. Let's hope this one stays truer to the game!

Small Soldiers is a classic for the 90's children amongst us. Frightening and enthralling at the same time - we had always wanted our toys to come alive...but had never thought that our toys would be the bad guys!

The son of a toy store owner tries out some new action figures: The Commando Elite vs The Gorgonites. However, the toy company that created the figures has used military grade microchips to make the little guys talk, it turns out that this was unwise. Shocking!

They've underestimated the power of the chips and this comes to light when the two opposing toy factions start thinking for themselves and engage in real combat. The Commando Elite attempt to wipe out The Gorgonites and don't mind that they might take humans out too.

The Commando Elite were truly scary and you really felt for the Gorgonites! I'm hoping they do eventually find their homeland of Gorgon. 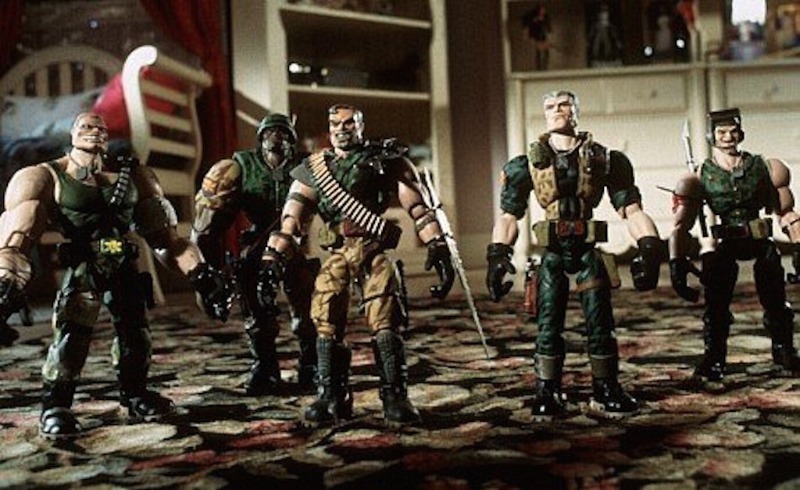 The ultimate toy movie and one we couldn't possibly leave off the list, the first feature length computer animated film from Pixar is a triumph. The toys pretend to be lifeless whenever the humans are around but once Andy and Co. exit the room, that's when the real fun begins. Woody, the talking cowboy doll, and Buzz Lightyear, the spaceman action figure, lead a host of toys through escapades in and out of the house, all unknown to their loving owner Andy.

We've decided to compile the whole Toy Story series into one spot on the list. Each movie brings us our miniature heroes in a new adventure with enough emotion to make us burst out laughing or crying at different points. Definitely one for the DVD collection!

A little boy is given a cupboard and a key for his birthday (I would have thrown a tantrum!). Unaware of the cupboard's magical powers, he locks his toy Indian in it overnight and in the morning discovers that it has come alive and has a name: Little Bear, and they soon form a friendship.

The little boy's best friend brings over his toy cowboy, Boone, to try in the cupboard, which leads to lots of tension and fighting between Boone and Little Bear in typical Cowboys and Indians style.

A classic toy movie, which led to toys being locked in cupboards in homes all over the world. Sadly I haven't heard of any real life cupboards having the same effect! 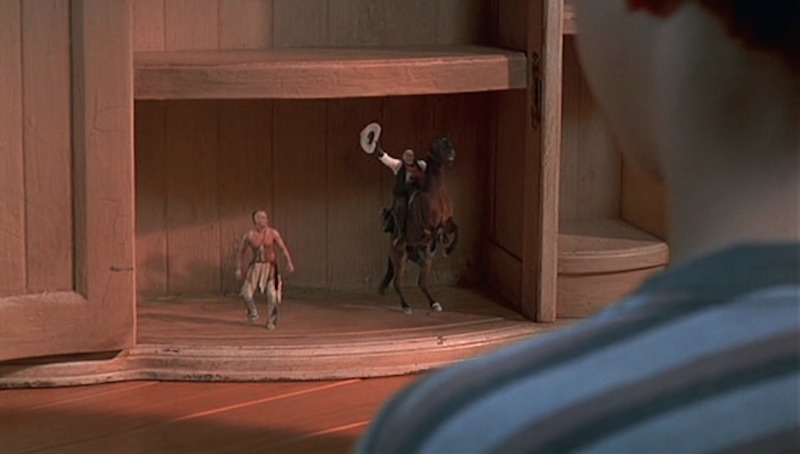 The line "A game for those who seek to find, a way to leave their world behind" still gives us chills to this day. When two kids find and play a magical board game, they release a man trapped for decades in it and a host of dangers that can only be stopped by finishing the game - which isn't as easy as it seems! Cue hordes of screaming monkeys rampaging through traffic and bats chasing little girls from houses.

Intended as a kid's movie, the realistic nature of Jumanji scared the bejeezus out of us, and still is a little creepy now. However, saying that, it stands the test of time and is one to pull out of the collection on a rainy day, though it may make you scared of that dusty board game in the attic! 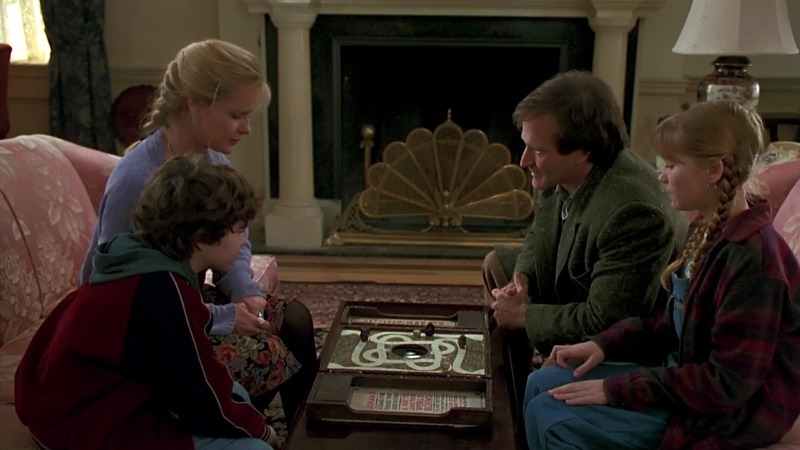 The big budget action film series is based on the Transformers action figure line. The Transformers toy's parts can be shifted about to change it from a vehicle, a device, or an animal, to a robot and back again. The films reflect this but in classic Hollywood style with everything on a bigger scale.

When the father of a teenager gives him an old Camaro, he has a chance to give a ride to his schoolmate love interest and also to participate in an ancient war of robots on Earth. His car is actually the Autobot Bumblebee, led by Optimus Prime, and they are in war against the evil Decepticons, led by Megatron. Both races are seeking the mystical Allspark talisman with opposite intentions: the Autobots intend to protect the human beings, while the Deceptions want to destroy them.

With some pretty spectacular fight scenes, it's exactly how we imagined the skirmishes going when we played with our own Optimus Prime on the living room carpet.

When I hear "Labyrinth", I always think of the creepy Goblin King David Bowie plays. Sarah goes through the huge, otherworldly maze known as the Labyrinth to rescue her baby brother, who's been captured by goblins. All through the story, she encounters creatures that all bear strange resemblances to the toys she has in her room.

Though not a massive hit in the box office upon release, it has since gained a cult following and is often found by younger generations by rifling through old VHS collections or stumbled upon on the TV on a Saturday afternoon. Oh, and did we mention it has musical numbers?

Focusing on the Lego line of construction toys, the film tells the story of Emmet, an ordinary Lego minifigure. However, things start to get interesting for Emmet when the wizard Vitruvius predicts that a person called "The Special" will save the world from the tyrannical Lord Business. And "The Special" just happens to be Emmet!

The Lego Movie is enjoyable for all ages with lots of laughs and great animation, with spin offs and sequels planned already. What are the odds it becomes a classic? 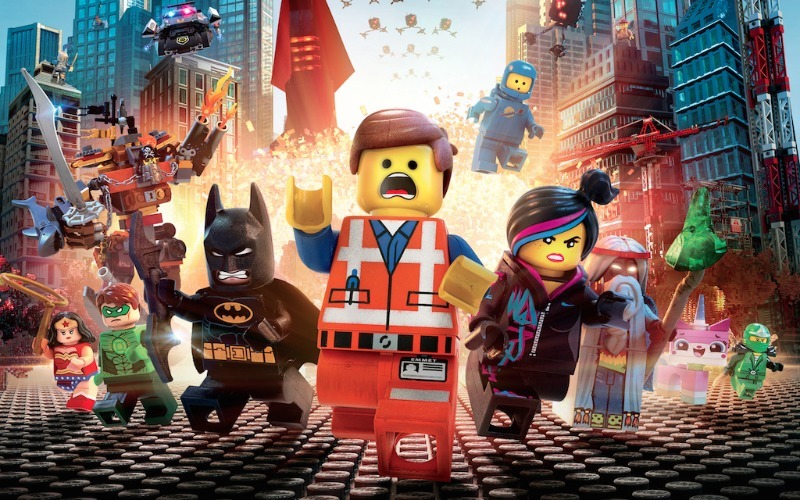 We were struggling to agree on a tenth, with lots of people's suggestions being shot down really quickly - getting to ten was harder than it looks! We were about to post a list of nine, which doesn't have the same ring to it, when Shona, our 8 year old visitor to the studio, piped up with Wreck It Ralph. A lightbulb moment - thank you Shona!

A great concept for a movie, you'll see everyone from PacMan to Sonic The Hedgehog in Wreck It Ralph. When a games arcade closes every night, the various video game characters leave their normal in-game roles and are free to travel through the power cables to other games consoles. Wreck It Ralph is tired of being a villain in his game, so he's convinced that if he can win a medal, he can become a hero. This leads to Ralph trying to win a medal in another game and causing lots of trouble for lots of other characters! 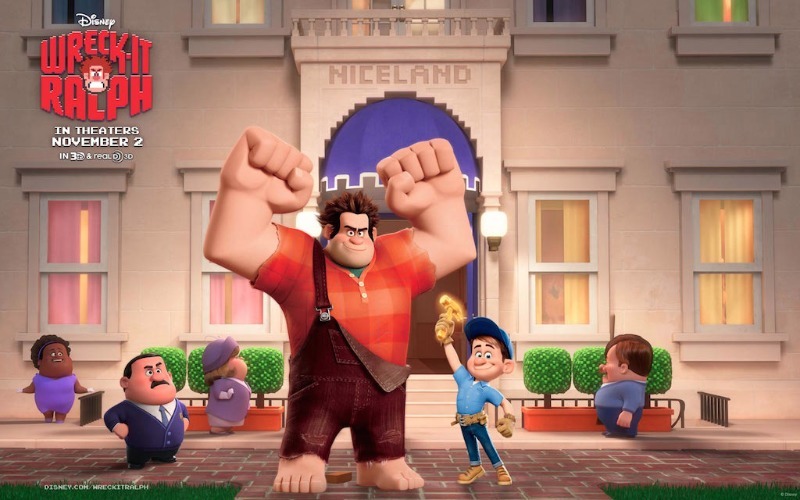